The producers regret to announce that, due to a serious medical condition, Cody Ray Slaughter is unable to appear on the Spring UK leg of THE ELVIS Tribute Artiste WORLD TOUR, The situation is beyond our control and we can only apologise to the fans for this development.

Whilst we wish Cody well with his recovery we are delighted to be able to announce that, the UK’s own winner of The Ultimate Elvis Competition ‘BEN THOMPSON’ is joining the tour at short notice and will appear alongside SHAWN KLUSH, DEAN Z  and the rest of the cast on all UK dates.

Direct from the USA, the biggest and best Elvis show in the world is back! Starring three ‘Ultimate Elvis Tribute’ World Champions including the winner of BBC’s ‘The World’s Greatest Elvis’ Shawn Klush, who jets to the UK with American compatriots – the incredible Dean Z and the UK’s own winner of The Ultimate Elvis Competition Ben Thompson.

Shawn Klush and Dean Z have been crowned grand champions of the Ultimate Elvis Tribute Artist Contest in Memphis, Tennessee – the only contests ever to be sanctioned by Elvis Presley Enterprises themselves. Shawn Klush was the ﬁrst to claim the prestigious title in the same year in which he was also crowned ‘The World’s Greatest Elvis’ live on BBC television in front of 6 million UK viewers.

Following his victories, Shawn embarked on a phenomenal world tour playing to sold out arenas and major venues in all corners of the globe, raising the bar to a level never before seen in the Elvis tribute world.

In 2013, Dean Z was next in line to take the tribute world by storm as he captured the Ultimate crown with his electrifying performances. As his popularity continued to soar across the globe, Dean quickly caught the attention of the producers of The Elvis Tribute Artist World Tour and was oﬀered a record-breaking contract to join Shawn Klush on the world’s most successful Elvis tribute show.

Dean’s ﬁrst appearance on the show took place at the UK’s Sheﬃeld Arena in 2017 to rave reviews and has since built a tremendous following in the UK.

With the following tour halted due to Covid-19, the news Elvis fans have been waiting for is ﬁnally here, as the biggest, best and most successful Elvis tribute show on the planet… Is BACK!

VIP Meet & Greet, limited tickets available.  Tickets include Premium Seating, a VIP lanyard and an exclusive Post-show meet and greet with the stars of the show. 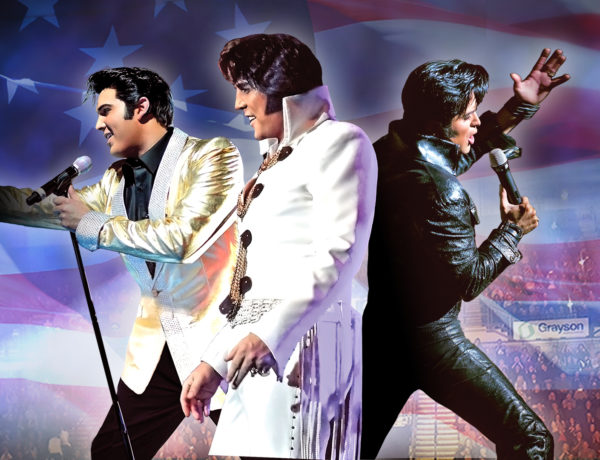